No other contemporary author has done more to establish roots for the white race, to painstakingly and eloquently establish a comprehensive history and understanding of white history than the Rhodesian nationalist writer and scholar Arthur Kemp. Two of his seminal works, March of the Titans: A History of the White Race and The Children of Ra, describe the historical and physical evidence for white Egyptian origins. In March of the Titans, Kemp writes:

Although situated in North Africa, Egypt had been settled by three white groups prior to 3500 B.C., namely Old European Mediterranean types, Proto-Nordics, and Nordic Indo-Europeans, with latter groups penetrating the territory as part of the great wave of Indo-European invasions which took place from 5600 B.C. onward.”

This period is known as the pre-dynastic period. The author John Anthony West and geologist Robert Schoch proved that the Sphinx was actually created during this period of white habitation. Journalist Graham Hancock also has linked the true origins of the great pyramids to this time as well. According to Kemp:

A bone figure of a woman with blue eyes, made from inset lapis lazuli, from Upper Egypt, [is from] the Early Predynastic period, Naqada I, 4000-3600 B.C. The ancient Egyptians often used lapis lazuli to illustrate eye-color in their artwork.”

Most people are unaware of this reality regarding ancient Egyptian civilization. Indeed, in the early 1990s, U.S. schools were pushing Afrocentrism in predominantly black schools stating that Egyptians—and indeed all the great civilizations of ancient history—were the product of black Sub-Saharan Africa. Many white students openly bought into this dogma and thereby were unaware of the hard evidence regarding widespread white influence throughout the legacy of human civilization. Arthur Kemp has done a miraculous job in countering these fallacies.

In The Children of Ra he writes:

Unintentionally leaked DNA results from a television documentary on the genetic testing of Egyptian pharaoh Tutankhamun revealed that his paternal lineage is a 99.6 percent match with western European Y-Chromosomes.”

The DNA tests results. . . . were revealed on a Discovery Channel TV documentary ‘King Tut Unwrapped,’ filmed with the permission of the secretary general of the Egyptian Supreme Council of Antiquities Zahi Hawass. He had previously announced that he would not release the racial DNA results of Egyptian mummies.”

Kemp pointed out that the camera panned over a printout of these DNA results and it unequivocally showed R1b DNA, a signature which is shared by those people in Scotland, Ireland, Scandinavia, England and Western Europe. The R1b haplogroup is one of the most common of European haplogroups. 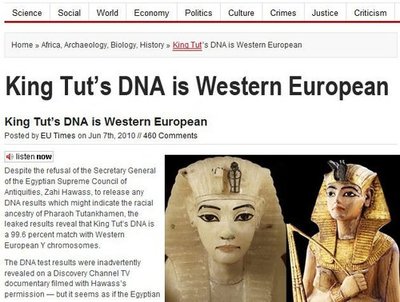 To wrap up his book The Children of Ra, Kemp states that the original population of Egypt was of old European stock. As the Lithuanian anthropologist Marija Gimbutas described in her book The Goddesses and Gods of Old Europe, this population, also known as the Pre-Aryans, reached their zenith in the Neolithic Age around 7500 B.C. and occupied a region that extended from the Aegean and Adriatic as far north as western Poland and the Ukraine. Later on, waves of Proto-Nordics descended from Mesopotamia and the flooding of the Black Sea around 3500 B.C.

Eventually, the Egyptians began interbreeding heavily with non-Caucasians and this caused both a reversal of the original demographics and the eventual decline of their civilization. Miscegenation has been praised by many modern academics, but the brutal truth is proven by science: It is one of the major causes of the decline and fall of civilizations. The reason is that civilizations are the expression of a particular people, linguistically, genetically and culturally, and once these three elements cease to remain dominant, the civilization which that population gave birth to ceases to exist. Let this be a warning to our own European-American civilization. Arthur Kemp has made an extraordinary effort in making this point. Every book he writes should be read by our children.

The Lost White Tribes of Peru

Twilight of the Gods